This great article about VK5ZOI’s experiences with space was published by the ABC – attribution and links below for those who may have missed the story initially as I did. Check out the ABC link below for extra photos.

To NASA personnel, he is VK5ZAI. To his neighbours at Pinks Beach, a small coastal town in South Australia, he goes by Tony. In his 30-year association with the US space agency, Tony Hutchison has been called upon to help in times of crisis, moderate calls between astronauts and their families, and run a worldwide schools program. He’s shared a beer with first commanders, had barbecues with mission specialists, and watched the space shuttle launch from the bleachers at Kennedy Space Centre. Looking back, it’s a life he never expected. 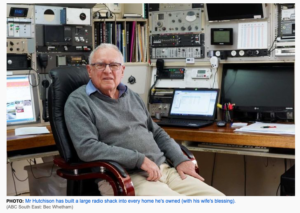 From amateur radio buff to NASA’s go-to guy Mr Hutchison, 80, fell in love with radio at age 10, had his amateur radio licence by 21, and became involved with satellite communication a few years later. In October 1992 he made his first contact in space — cosmonaut Anatoly Solovyev onboard the Mir space station.

“You could talk up to them as they passed over and they’d talk back to you.”

For the next year Mr Hutchison was fielding regular conversations from his home radio shack with the low-orbiting laboratory.

“The Russians liked to brush up on their English language a bit. They would call and one day I got a reply from them. That spurred me on a bit.”

He became good friends with one of them, Aleksandr Serebrov. “He would call me probably a couple times a week as he passed over. Of course they keep to Russian time, which is almost the opposite time to us, so it would be in the middle of the night and Alex would call.”

NASA eventually caught on and had Mr Hutchison doing communications for Andy Thomas while he was onboard Mir.

It was Serebrov who took part in Mr Hutchison’s first school link-up in 1993.

A group of keen country kids from Loxton High School went to Mr Hutchison’s radio shack in the Riverland, where they asked the cosmonaut questions about life and space. “It’s quite an adrenalin rush when you hear the voice come through: ‘Hear you Tony loud and clear, go ahead please.’ Even after as many as I’ve done, it gives me a great thrill to hear that voice first come through.”

In its 20 years, ARISS has connected astronauts to 1,300 schools worldwide, 70 of which are in Australia.

“It’s taken up a lot of my time. I’ve thoroughly enjoyed it,” Mr Hutchison said. Unlike a casual chat on the phone, he said linking students with astronauts was a different thing entirely. “You’ve got several hundred at the school waiting at a remote site, and you’ve got the astronaut waiting on the space station — you might call once, call twice before the station comes within range.”

Of the thousands of students who have taken part, some have gone on to space science.

“We have one desire, to pass on our knowledge to the next generation and encourage children, kids, university students to continue with their work in engineering, science, mathematics,” Mr Hutchison said.

Friends and family out of this world

Mr Hutchison has spoken with close to 100 astronauts in his time, from a bit of banter to ensuring the line quality between an astronaut and their spouse during precious moments of connection. “You can hear everything, but you don’t disclose the private conversation. It’s a great honour.”

In 2001 NASA invited Mr Hutchison and his wife Jill to attend a shuttle launch. They were also able to meet some of the many astronauts VK5ZAI had heard but not seen, including Bill Shepherd, the first commander of the ISS.

“I had no idea that I’d ever get involved with astronauts the way we have.”

“I’ve been fortunate and had the privilege to meet a lot of these guys, just average guys with a brilliant mind, and you can sit down and have a good conversation about their life.”

The Hutchisons were treated as friends and family of the astronauts, dining with the crew before the launch and watching take-off from a little stand three kilometres from the site.

“The noise is incredible, you feel your whole body shake … all of a sudden you’d hear this enormous roar, you could feel it right down your spine.”

Saying no to NASA

During the trip, NASA offered Mr Hutchison the chance of a lifetime — a two-year contract with master control in Houston.

After discussing it most of the night at their motel, the couple opted to turn it down. With children and grandchildren back home in Australia, they decided the timing was not right.

At the end of 2019, Mr Hutchison will step back from ARISS indefinitely.

“It’s been a wonderful life … I just feel as if I’m getting a bit stale and it’s a little bit hard on Jill,” he said.

“She certainly knew what she was getting into, I think, when we got married, and she’s backed me all the way. I’ve been very fortunate.

“We’ve got a little motorhome and want to do a bit more travelling around Australia.”

With talk of NASA building a new base on the Moon in a few years’ time, Mr Hutchison is not ruling out a return.

“I’m getting a bit old but I hope I’m around to see it. I’m looking forward to that.”