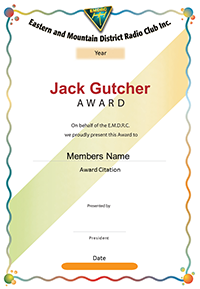 In memory of Jack Gutcher, VK3APU, who was a foundation member of the Mountain and District Group, a small group of Amateurs who helped to operate the local civil emergency group for Mt. Dandenong and districts. Jack helped form a radio club for the Eastern suburbs, known today as the EMDRC, where he was foundation Treasurer for many years, later holding many other active positions. He became a Silent Key in 1978 at the age of 60.

In its first year, the Award was to be presented as a Junior Award to the most regular attender and proficient operator on Club Nets. Conditions may be changed each year at the discretion of the committee. The following is a list of recipients with the year in which the award was presented: