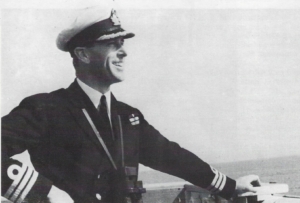 Born in 1900, by 1918 on leave from the Navy, he learnt to fly, however he decided a career in Signals was his preferred path forward.

In 1924 he went to the Signal School at Portsmouth, and in 1925 attended the Higher Wireless Course at Greenwich, qualified and became a member of the Institution of Electrical Engineers.

Then in 1926 was appointed Reserve Fleet Communications Officer and in 1927 Assistant Fleet Wireless Officer to the Mediterranean Fleet. He had topped his Signals course.

Between 1929 and 1931 Mountbatten spent time as a Senior Instructor in Wireless Telegraphy at the Signal School in Portsmouth, teaching and lecturing and making changes to the tools of instruction, devising a new way of laying out radio diagrams making them easier to understand, and writing the first comprehensive textbook on all wireless sets used in the Navy.

He returned to the Mediterranean Fleet in 1931 as Fleet Wireless Officer responsible for wireless communications through the 70 fleet ships.  He was concerned for the image of wireless telegraphists and set out to prove how important they were. He battled senior Fleet officers on the importance of modern technology.

In 1932 King George V was to deliver a message on Christmas Day via the BBC, however Navy wasn’t able to provide coverage when this was announced. Mountbatten was summoned and ordered to “make it happen”. A specially designed HF receiver was eventually setup, a cable run to the ship, which in turn transmitted the King’s words on a hastily modified HF Transmitter, allowing for voice transmission instead of Morse telegraphy. All ships used their loudspeaker sets to re broadcast the king’s message. The equipment was commissioned by Christmas Eve. The BBC broadcast was picked up just minutes before the speech, was received in its entirety but faded barely 5 minutes after the signal beamed at Malta faded out.

He was a strong advocate for the vital role of communications in the Navy.

In 1934 he was given command of HMS Daring, a modern destroyer. In 1936 he had pressed for use of mechanical encipherment of signals, but Fleet rejected this until after the war had commenced. As a result many lives were lost. An undergraduate review once said he was depicted as saying, “ I invented technology”. There is no doubt he was a man with a diverse interest and accomplishment in flying, education, cinema, cypher machines, supporting improvements and innovations before officially accepted.

How much have we indirectly benefitted from his progressive and enquiring approach?