Ever since I’ve been interested in radio, I’ve always had a fascination for Morse Code (CW). This mode not only has the advantages of a narrow band mode in bad conditions but also the romance of radio back to its origins.

I’ve had fun over the years investigating many facets of this hobby and CW is now the next on the list. Doing what most of use do and go and get You Tube trained, I became interested in CW contesting. Watching those gun operators doing Single Operator 2 radio’s (SO2R) with one radio in each ear on the headphones and barely ever touching a CW key was amazing. Whilst I doubt that I would ever get to that level, I have developed an appetite for CW contesting.

It was clear that most operators use logging software interfaced to their radio’s. The one I chose to use was the popular N1MM logger that can also key the radio. The N1MM software can have a number of F-keys programmed with macro’s to send your CQ, exchange etc.

Owning a FT857 and FT817 meant that keying the radio would have to done using a serial connection to the radio to drop the PTT line to ground on the interface port. A more modern radio such as the IC7300 have a direct USB to USB computer connection and don’t require a outboard interface.

I found a really simple to build interface, most of the components are probably floating around the shack somewhere. Cliff, N4CCB’s You Tube channel, link below, had a good video on building the interface. The interface was designed by Scott Davis, N3FJP, again link below.

Here is the circuit diagram from Scott’s web site:

If you need components, the following are available from Jaycar: 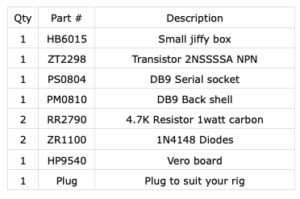 The version I built was as shown, using a DB9 serial connector. I decided to mock up the circuit on  a bread board first to make sure that my laptop, USB to serial cable and radio where all happy talking to each other before getting the iron out. That took all about 10 minutes.

This circuit is also a good primer for those unfamiliar with serial. I found on my serial interface negative 13volts on pin 7 when not keyed and positive 13volts when keyed.

A general note of warning, be vary careful when connecting serial to your pride and joy, some radio’s use TTL for programming etc and that’s a lot lower voltage and could result in the magic smoke escaping from the treasured rig. I have built programming interfaces for the FT857, 817 and my IC735 using the MAX232 level converter to convert serial to TTL to do that job.

Time to commit to the iron. I mounted the components on the vero board and before trimming the component leads, one more test using N1MM and the FT857 to confirm everything was the right way around.

The final mounted result along with the USB to serial cable: 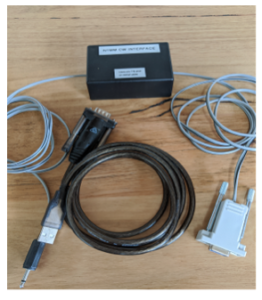 Now the keen eyed amongst you will notice that I have used 2 core cable that is not shielded. I rarely ever run a full 100Watts let alone full legal power and resonant antenna’s so rarely have much in the way of stray RF wandering back to the rig. Your mileage may vary with this and you may want to use a shielded cable and chokes to minimise any effects of stray RF.

As mentioned previously, I am using the N1MM logger software which has good documentation on configuring it to key your radio via the interface.

To connect the interface to the computer, I am using a USB to serial interface with the Prolific chip set. Anybody who has dealt with this chip set for other projects knows how this can be hit and miss. Unfortunately there are a lot of imitation products from Asia that can make this “interesting”. Also it can be driver hell when using this with Windows 10 as they often update the drivers.

I used a USB to serial interface purchased at Jaycar which worked fine with the latest Windows 10 drivers. The guys who write N1MM suggest using the FTDI based USB to serial adaptor. I’ve also seen this suggested by Flex Radio as well. They believe its a more reliable chip set, albeit more expensive for us VK’s. I have not used a FTDI based cable so again, your mileage may vary.

I have run the interface up to 28WPM and found no issues with keying the FT857 PTT line.

Now back to the Koch trainer to get my speed up to something useful.

Thanks for the excellent article Darrin. Regards Ed.