It is always surprising, to me at least, how quickly a year passes. It doesn’t seem that long ago I was writing about the Nunawading Spring Festival! The event is hosted by the City of Whitehorse and is a free family event featuring 80+ locally based organisations, with five performance stages, food stalls, amusement rides and free workshops and activities that do their best to follow a theme. The event is regularly attended by 15,000 – 20,000 local residents and on such a mild day, was well attended.

With such a brilliant focus on STEM of late in schools, this year’s theme celebrates STEM Learning, all things Science, Technology, Engineering and Math. “Your Passport to the future!”

Jack VK3WWW, has led EMDRC in supporting this event again with Martin VK3TMP setting up early. Jack has brought together some fun interactive and display items to help interest those young and older, with items ranging from hand crank generator and switchable loads and a ‘fox’ and Yagi antennas to engage the kids and some tech items including a Raspberry PI based antenna rotator controller with touchscreen and a PIC based GPS Locked Clock designed as a start clock for direction finding events designed by Ralph VK3LL. It’s a big day for those participating with on site at 0700 to get a reasonable park so all the kit can be unloaded, hauled to site and erected ready for the 10am opening. 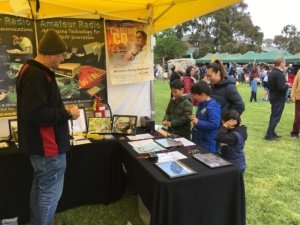 In addition, Jack relayed a story about his very nice 121.5 Mhz yagi. Build for the EPIRB – emergency beacon frequency – Jack mentioned a relatively recent case where a beacon had ‘gone off’ but Canberra couldn’t get a fix. Local emergency responders made some enquiries and to little surprise, no one had a functioning receiver with a suitable antenna. One agency had a Rx but with a u/s antenna. Another had a functioning antenna but u/s Rx – not to mention a response time of a ‘few’ hours. Anyway, this little

unit built by Jack from some pvc pipe, stainless thread, some fibreglass, brass rod and RG58 shield is now ready for any future incidents if needed. Very nicely crafted indeed. [Perhaps a story for another time! Ed]

The VK3ER WIA broadcast hit off on time and it was left to Jack to run the net afterwards. A Stirling job given the background noise at times from the stage nearby. A good number of reports came back

Jack reported that the engagement was better this year than last, perhaps due to the theme, and certainly we were kept busy enough with some engaging encounters. A few ‘old’ ex-hams popped by for a chat and a few others who we might see at future club nights. Also stopping by for a visit and chat were Leigh VK3TOQ, Tom VK3FTOM and John VK3PZ with XYL Susan also

stopping by for a chat. Special thanks to Leigh who hung back and helped pack up in quick time. Much appreciated. With all the gear packed into Jack’s little hatch, we called it a day.

Check the video at:     https://youtu.be/TmQixWqs-bo

Jack has a few other interesting videos at his YouTube site: https://www.youtube.com/channel/UCwRLzqI8Q7JcoN5wddUAGfA and on Instagram at: https://www.instagram.com/vermontcreekbed/?hl=en that include a few grabs from today’s session. I think the trapeze shots were really about potential masting ideas and the robot was well, something about mobile ops.

See you next year.