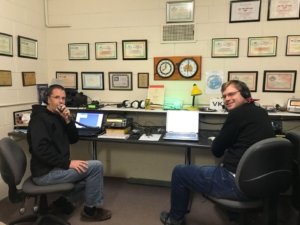 After I’d been at the club since the early morning being taught how to put powerpoles onto portable equipment by Marc VK3OHM and doing some antenna work with Bob VK3AIC, Darrin arrived at some point around 12pm and we started setting up the shack for the Trans-Tasman contest.

We figured out that there is actually a 160m antenna and rig so we got to work hooking the 160m antenna to the IC-7300, and the 80/40 dipole to the TS-2000. A lot of reading of manuals was involved as the auto-tuners on both radios didn’t seem to behave quite as expected but we got things figured out.

We spent some time playing FT8 and when it was getting closer to 6pm, we actually managed to set up VKCL4 on the shack computer and Darrin’s laptop in networked database mode so that we could simultaneously work and log contacts.

When the contest started, we quickly got some contacts on 160m despite only being able to work around 1.820-1.835Mhz, so not quite in the right part of the bandplan for SSB phone.

I was quite surprised that 40m seemed quite dead for the whole contest period (from 6pm to midnight), with most of the contest activity happening on 80m.

There was quite a bit of interference between the two rigs, especially at frequency multiples.

We managed to get a handful of ZL1, ZL2, ZL3 and ZL4 contacts and apart from that it was mainly VK2’s and VK3’s with a good smattering of VK4 and VK5 and the occasional VK7 station. Notable mention to VK4FOMP who did well for himself as a foundation station.

All in all we got 109 contacts for a score of 1520 points thanks to some lucky multipliers.

We had a few visitors as well, including VK3TMP, VK3PZ, VK3RU, Steve whose callsign I still can’t remember, and a few others.

It was good fun and a very good result, and Jaimie should probably also be happy about the money that went into the box for cans as there was ample consumption of those.

Some learnings and potential improvements:

– If possible, make the 160m antenna more broadband. Maybe a capacity hat could be added to the top?

– Good closed headsets are necessary for close proximity operation. I like to use in-ear headphones with ear protection over it (like the very good earmuffs we have in the shack), but left my in-ear headphones in my other jacket.

Thanks Luke and Darrin. Regards Ed.