On a recent Thursday catch up at the club rooms, Fred, VK3ZAQ, and Roger, VK3BKR, arranged a rendezvous to sort out Fred’s mobile antenna needs.

Roger was well equipped to undertake this task having installed thousands of antennas into taxis over his career.

Checking the space between the roof lining and where the new base will be cut.

Roger checked out Fred’s car for suitability to mount a 2/70 in the middle of the roof. This is something that I don’t recall seeing for many years but still makes good sense if you want to maximise your ability to be heard while mobile. 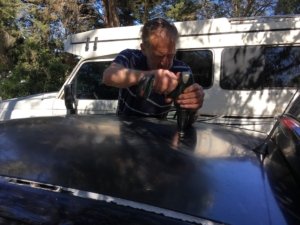 Roger VK3BKR committing to the task

When I saw Roger checking out the location, I must say I was reminded of the vets examining cows on the dairy farm my parents ran!

Roger had a very neat little sheet metal cutter that he had during his career that was still factory sharp. The cutter has a short depth of cut due to a ring around the top edge that prevents the cutter from passing through the role and then the roof lining.

Fred fished the base from the roof lining and it was soon secured with a rubber seal and tightened down. All that remained was to run the coax through to the front of the car.

A good job that will make using the radio a bit easier and more effective than the little FT-60 alone.

A beautiful spring day too for the job. Regards Ed. 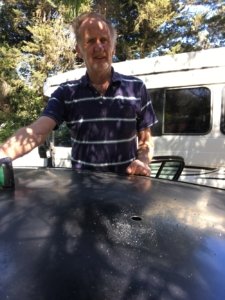 Cut – and a little scarf to be carefully swept away 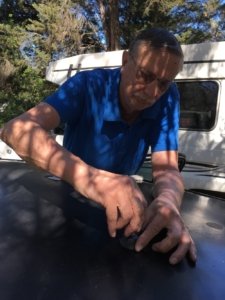 Fred, VK3ZAQ, fishing out the base through the roof 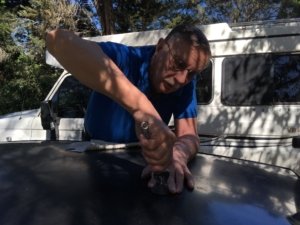 Fred tightening the base on his car roof.