Finding that source of RF Noise with QRM.guru – David VK3RU

Like many amateurs, I live on a suburban block surrounded by local neighbourhood RF hash.  My noise level on 40M was typically S9 plus with crackling interference.  In the past the basic checks were completed, LED lights, solar inverter etc and without any real conclusion, became convinced the source was probably a local Plasma TV. 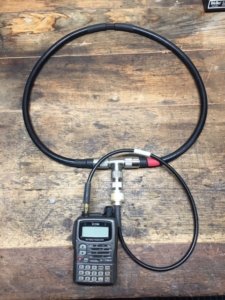 A recent presentation by RASA to my club, the EMDRC, was very well received.  Part of their delivery included a discussion on QRM and their efforts to help amateurs identify noise sources and possibly resolve them.  In conclusion, RASA presented the club with a Kill QRM kit, a bagged up kit of parts to help club members locate QRM sources and potentially fix the offending item.  The kit is well documented on both the RASA site http://vkradioamateurs.org/ and https://qrm.guru/ but importantly includes the parts and instructions to build your own simple non-resonant DF loop.   Realising this might be of assistance in my case, I was pretty quick to grab the brand new kit and build the loop.  I actually built my own version to test the concept, and then built one for the club.  All and all, pretty simple to construct and it really works. 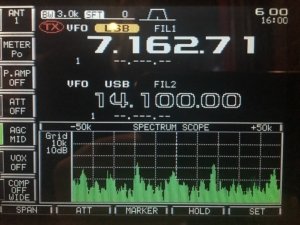 The problem turned out to be my Merlin MTE120EVO garage door operator and as my garage has only one door, a very big motorised steel door, many wrong assumptions were made.  The noise only appeared with the door down and safety light off.  It was not there with the door up.  Calling Merlin initially not very helpful, they wanted to send me off to the installer offering to replace the unit under their generous 5 year warranty, but I pressed insisting a conversation with someone technical would save a lot of time and cost. 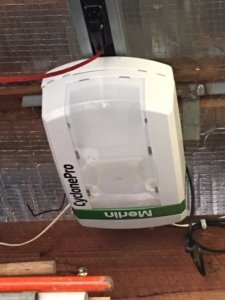 After emailing Merlin, I pretty quickly received a call from their tech guy who was very helpful.  He advised that there had been four previous RF noise related complaints (essentially to AM broadcast), now five, in many thousands of units distributed across the country.  He went on to describe the unit programming having been designed to meet power consumption for Australian Standards. In this case, the unit is default programmed to go into a “Low Standby Mode” when the door is down and light off.  In this state the unit consumes <1W.  When the door is up, the controller is in “Normal Standby Mode” consuming around 5W.  So the problem is a noisy power supply when unloaded. 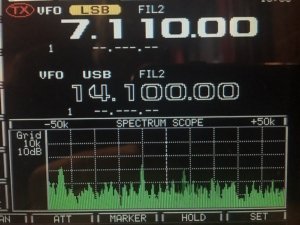 Replacing the power supply with a less noisy unit might be possible, but there is a work around in operator programming which simply keeps the unit in “Normal Standby Mode’ fulltime, thus drawing a bit more current but importantly, keeping the noise down.  It’s all in the Merlin installation manual and after all, the difference between 1W and 5W at 240VAC is hardly a concern when it comes to your power bill.

Good luck chasing your own sources of noise.  Go to https://qrm.guru/ or your local radio club and get started.  For members of the EMDRC our own kit is ready to deploy.

A question was received re how much the noise floor has dropped.  David said…

The shots were before and after but without an audio clip I agree it is a bit hard to pick.  The best of my original shots show a regular spike roughly 10Kc apart but in reality they moved up and down so really hard to see in a photograph.

Thanks David, a nice little article and a good lesson too! Regards Ed.