This year the VK3ER/p EMDRC team comprising of Peter – VK3QI, Jack – VK3WWW, Mike VK3AVV, Jonas VK3VF and Andrew VK3BQ participated in the Spring 2013 VHF/UHF Field Day. The club has been a very active competitor in this contest over the years, and we have a very good spot at Mclaughlins Lookout near Blackwood in the Wombat State Forest. Around 90km form Melbourne with a very good path (no obstructions) 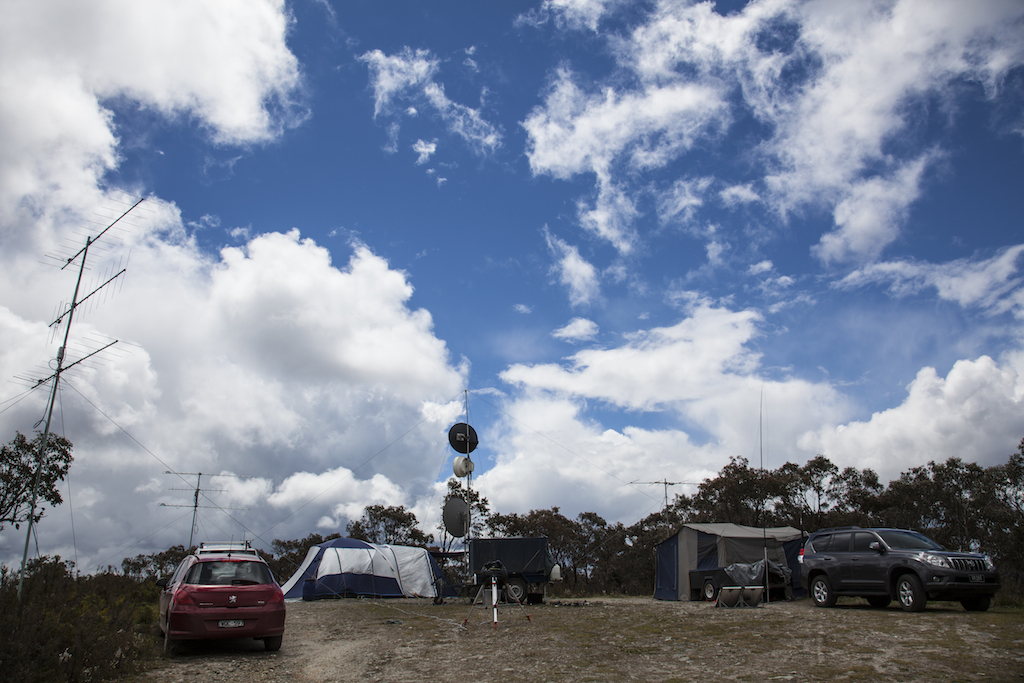 I was able to organise a day off work on the friday, and set about packing my camper trailer with the required bits and pieces and left Melbourne just after midday. Arriving at the site just after 2pm, the site had already began to take shape with others well versed in the site setup having already progressed with some of the work. I quickly setup my camper trailer and then assisted with the remaining antenna setup. The weather wasn’t too bad, we had the occasional quick sprinkle of rain. By 6pm, the site was well setup, and we began to connect the equipment and test the radios and ensure no issues. This was when we discovered our first issue, The wonderful VKCL logging software (written by mike in our team) has just seen a version4 upgrade that incorporates networked logging with a central database. This nifty new feature allows each operator to share the grid square of a station with all operators and in our case, see the current mode/frequency another operator is currently on. To make this work, all computers need to be on a Lan, but our router had a dead power pack. A quick search through the boxes of gear found what we hoped would be a compatible supply, plugged it in and the box happily flashed its less at us, we were back on the air. 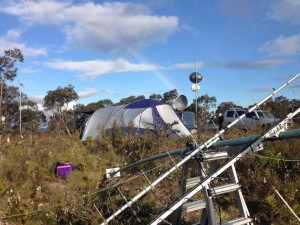 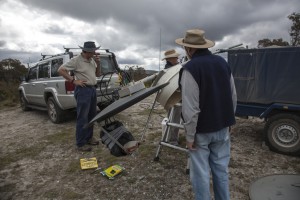 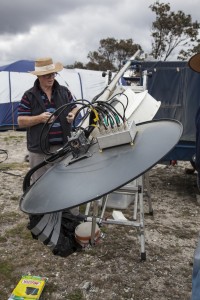 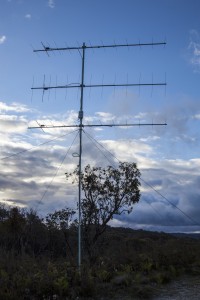 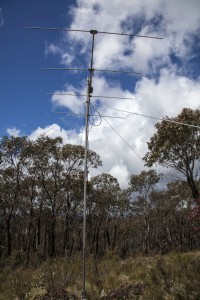 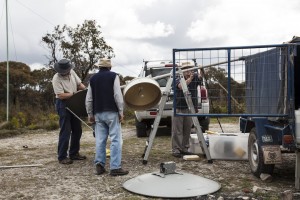 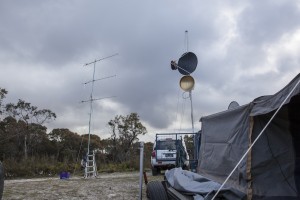 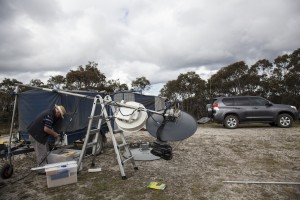 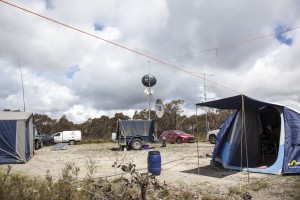 After setup was complete, I fired up the BBQ and we had dinner before an early(isn) night to bed ready for the big day.
*i had an opportunity to setup my FT817 and wire antenna on the camper as a test run for my camping trips. and was very impressed with the performance, working J88HL DXpedition on 14MHz who are on ST.Vincent Island in the Bahamas on my random bit of wire and my 5 watts.

Saturday morning we awoke to similar weather, low cloud (at >800m asl, we were below the cloud base, so everything had a cover of fine mist) with the occasional shower of rain. We tinkered and tested the setup, readying our selves for the mid day start time.

I was mainly working the 70cm station, this consisted of an icom IC706mk2G, driving an amplifier, connected to phased horizontal yagis for SSB and a single shorter vertical yagi for FM. The station used a smart switching system that uses band data from the radio to automatically change form Horizontal to Vertical antennas at the mast head amplifier when modes were changed on the radio. You could quickly move form FM to SSB and be on the right antenna.

We have a similar setup on 2m, with phased yagis for SSB and a vertical yagi for FM connected to a smart switching arrangement, operated by Jack.

50MHz is connected to a 5 element yagi, operated by Mike

23cm uses a ~1.8m dish and is mounted on a rotator on the gear trailer, 2.4-10GHz uses a ~1m offset dish and 24GHz has a smaller dish. 47GHz was able to be mounted on a small tripod, but weather conditions weren’t conducive to this being operated over the weekend. Operated by Peter. With Jonas assisting everyone as required. 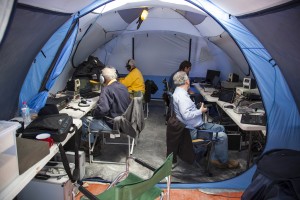 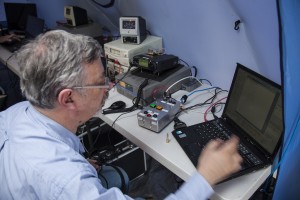 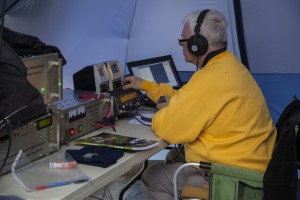 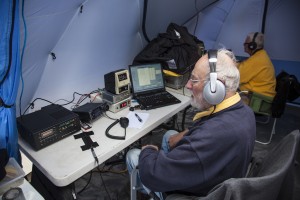 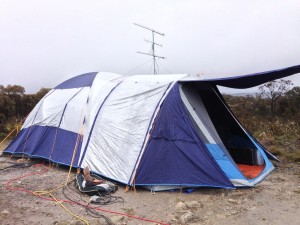 The conditions were average, with no real “enhanced” conditions all weekend, we worked the normal spread of contacts over the weekend covering VK5/VK2 and VK1 plus the usual VK3 stations. A number of the regulars were missing, maybe because of the weather. Some of the normal home stations didn’t appear to operate either. I haven’t seen the final combined results yet, but it would have been around 400 contacts over the 24hrs. 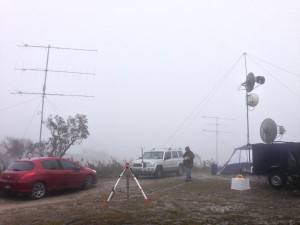 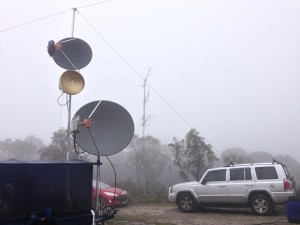 The rain really set in around 5pm, and got progressively worse as the evening continued, my 70cm station started to experience some inconsistent antenna VSWR issues, and we began the troubleshooting, changing patch leads from the hardline first, then working back at the Antenna end. We surmised water in the system was causing inconsistency, but weren’t sure if it was in the switching/mast head box, power devider or another part of the system. Over the next couple of hours it would get better and then worse, and we changed and removed parts of the system. At midnight saturday night, we still had the issue, but no mast head amplifier or antenna switch as they had been removed (in the dark), but with it still raining, and the band activity dropping off we stopped looking. We surmised it was in the hardline feed, but it turns out after more investigation sunday morning, it most likely was in a “N” barrel joiner at the antenna end, it must have let a dribble of water in and was messing with the VSWR. The sunday setup was just one of the horizontal yagis directly connected, once we had removed the joiner, the setup worked well. 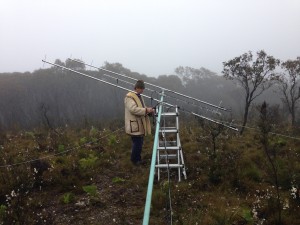 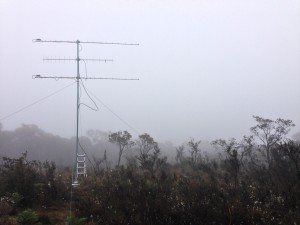 Jack Fixing the 70cm array sunday morning in the rain.

It rained most of sunday, and was raining as the contest finished, we began the pickup, i had a small window in which to try and pack my camper in the least wet (we had the cloud mist and brief but heavy downpours) and managed to pack it up and away in a small weather break, but it really was very wet, so much so I have set it up at home in the driveway to allow it to dry out. 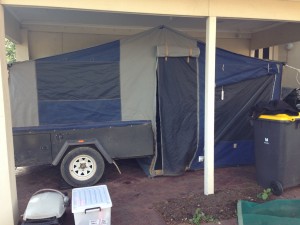 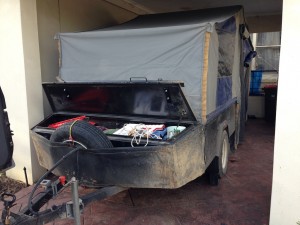 Camper in my Driveway trying to DRY OUT!

It was a fun weekend away contesting with the station working well, and everyone and everything staying mostly dry. I wonder what the summer field day weather holds for us 😀 Thanks vk3er guys for letting me join in.

This time lapse shows the first 3hrs of the contest, you get an idea of antenna orientation changes and our lovely weather.

This video taken Sunday morning shows the weather conditions we faced for a lot of the 24hrs of the contest.

This video shows the site pickup in the rain sunday afternoon.