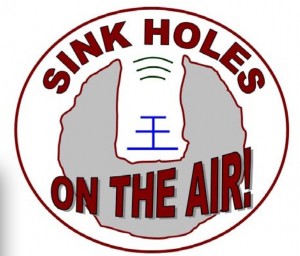 Amateur Radio Operators are always looking for challenges. When the opportunity to launch a new sport arose, many operators were quick to participate. One amateur was recently quoted as saying “Simple point-to-point communications just didn’t do it for me any more. Sink-holes On-The-Air is an exciting new-low in Amateur Radio tradition that pushes the barriers of communications just one step further into the noise floor”

The essence of this new DX craze is to find a large hole in the ground, set up your transmitters and antennas at the bottom and see how many other operators you can contact. Points are awarded in accordance with a complex formula based upon the diameter and depth of the hole. Double-points are awarded for Sink Hole – to Sink hole contacts.

One of the characteristics of the sport is that it is not permitted to reach the operating site by mechanical contrivance. The last 50 metres to the station site must be achieved by ladder or abseil descent. Electric winching devices are prohibited unless special dispensation has been obtained for disabled sink hole operators. Equipment should be carried down the hole on the back of the operator. Parachute drops are permissible, but are generally frowned upon and carry a 2-point penalty to the station tally. It is ok for the rim of the sink hole to have an elevated aperture, but the actual station position must be close sea-level to qualify.

Despite the logistics of carrying generators and battery packs out of the hole at the end of each event, by gentleman’s agreement all batteries must be removed so that discarded lead-acid batteries don’t contaminate the water table at environmentally sensitive locations. Following the successful campaign for visitors to national parks, operators are encouraged to follow the slogan: “Take nothing but photographs and small rocks, leave nothing but toilet paper”.

Volcano operation is permitted, but it must be inactive. This ruling follows the formal complaint lodged against the DX group operating with a YJ8 call from the active volcano on the island of Tanna where it was felt that the resonating column of rising ash and steam gave the group an unfair advantage over regular Sink-Hole operations. This was in spite of the logistical issues of operators making themselves understood through a fireproof suit using microphones that tend go soft with heat.

There are prime DX sites opening up all the time in South America. A major DX-Pedition is planned for the Yucatan Peninsula in South-Eastern Mexico in 2015 to take advantage of the extensive limestone formations and the points multiplier that applies to floating SOTA stations where the sink hole is partially filled with water.

CW operators should listen out for the new ‘Q-code’ abbreviations – ‘QDH’ which means:
What is the depth of your hole? / The depth of my hole is nn metres. Apparently this new abbreviation is sometimes used in conjunction with the existing QRP code for operators quietly transmitting from their hole at very low power, but contacts of this type are extremely rare. A second code ‘QHL’ may accompany a distress call from a SOTA station. This code essentially means: ‘Help…my Ladder is broken’.

Not just any sink hole can be used for operating. Only specially gazetted and approved sink holes may be occupied. For training purposes, operators may dig an hole to rigid specifications in their back yard to operate from to practise for contest events. This is referred to a ‘The Castle Option’ for reasons that are obvious to movie goers. (“Dad, I dug a hole….it’s filling with water…”)

The list of valid SOTA sites is long and is getting longer. One satirical application was made recently to embarrass road maintenance services for a large pothole that spontaneously appeared in the inbound lane of the Monash Free-way, to the South-East of Melbourne.

SOTA signals can often be identified on-air by the odd fluttering affects on their transmission known as ‘batscatter’ caused by the movement of bats. For brief signal surges, careful application of a starter pistol from the bottom of a sink hole can cause enough bat movement to trigger RF reflections over the lip of the hole. There is also a rare propagation effect known as ‘Mohorovicic Ducting’ where signals permeate through the earth between sink hole’s when several planets in the solar system line up sufficiently to apply combined gravitational forces to our planet’s mantle. There are many such subtleties to this sport that are not immediately obvious to the uninitiated that will take considerable time to master.

A small number of operators have been pushing boundaries even further by taking portable microwave dish antennas to the bottom of their holes for the very exclusive art of SMS communications. (Sinkhole-Moon-Sinkhole transmissions) Timing for these events are critical and contacts tend to be extremely brief.

Operators are ranked in order of points obtained from their contacts. At the end of each year The top ranking operators can apply for the coveted Amateur Radio Sink Hole Award, affectionately referred to as the ARSHole Award. After careful verification of their contacts are complete, qualifying operators will receive their ARSHole Award certificate in the mail. The award comes with a hat bearing bright LED lamps and the distinctive award logo, that say ‘I’m an ARSHole Operator’ so that award operators may recognise their counterparts at conventions and special events. Organisers of the sport are hoping to double the number of qualifying ARSHole Operators on-air over the next 2 years. To find more details of this highly sought award visit the web site. This can be found by entering the key words ‘arshole award’ into any Internet search engine.

This competition will in fact supersede the poorly subscribed Coal-Mines-on-the-Air which fell into disrepute two years ago, following the tragic event a little West of Rockhampton in Northern Queensland when the corona discharge from a 1kw transmitter into a vertically oriented quad-beam triggered a coal dust explosion 300 metres below ground level.

If you are a Radio Amateur and find that all the regular challenges have been met, you may want to spice it up and have a go at this new sport. It’s a great way to get fit and make new friends.

The motto of the Sink Hole Operator creed:

“We’re going down – and we’re taking you with us!”

**this was passed to me from a member of the Gippsland Gate amateur Radio Club and appeared in their January 2014 newsletter.