Having a little spare time after a busy week, I needed to do something a little different. The current circumstances mean that we have to amuse ourselves – what a treat! Best not try to do everything at once hihi.

I headed to the workshop to take on a couple of jobs. The fist was to modify an ikea table, lift it and put on casters. I can now drag that around for other projects and don’t need to bend.

Now to the ‘arm’. I am lucky enough to have a ‘buddi’ mast but also wanted a way of affixing a vertical wire/coax antenna for the higher bands. Being aluminium, I needed to get the antenna away from the mast to some degree at least, but how to do that?

I had some redundant fibreglass tent poles about 3/8 dia and 500mm long that were no longer needed – the tent had rotted. Being an inveterate hoarder, I dragged one of my stock out. The next step was to work out how to mount it to the mast. I have the 1/4″ adapter so poked around in my aluminium stock (shoebox) and found a bit of r/angle offset and a bit of round too! Lucky me.

Now I’m no engineer and work on a philosophy of experienced guestimation – what I call common sense. I decided that I could screw the round to the right angle with sheet screws after drilling a couple of well placed holes (allowing for necessary ‘slop’). The rod would fit through a hole that was with horizontal, or allowing for my tolerance level, at an angle (so screws didn’t interfere with th

Clamping the rod into the ‘head’ I found an 8mm hex head bolt. A hole and a tap made that happen. A little WD40 as lube was good enough too hi hi. Hand tight is enough but I can always put a larger knob onto the hex head if needed.

So, a spray of primer (th

at’s all I seem to get to) and it’s as complete as it ever will be.

BTW, I drilled a hole in the aluminium end of the pole and put a keyring in there for the moment. The wire or line can be clipped in with the ‘toy’ carabiner at this stage.

Now, time for a test. Guys will be necessary of course.

Not sure when that will be though…

Update…. quickly threw together a 6m coax antenna – design by VK2ZOI – and it looks like it hangs well and tunes nicely across the 6m band with the lowest SWR in the FM section. Next, some time required to give it a test… 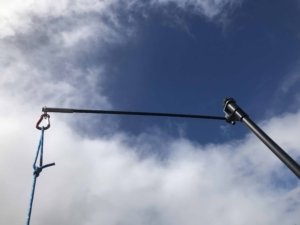 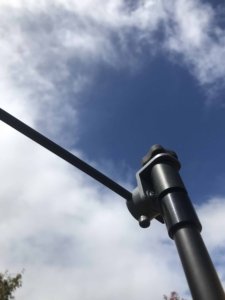 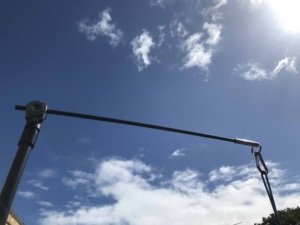 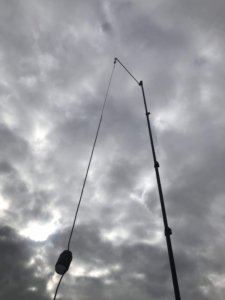