An evolving multiband antenna for the suburban block

Whilst discussing the challenges of operating HF discretely from backyards in the suburbs, Darrin, VK3VDP mentioned that he thought a vertical antenna based on the ‘DXCommander’ multi-band HF set up would be an interesting project. With available space and suitable mounting points a challenge for many popular antenna configurations the space efficiency a vertical provides is attractive. 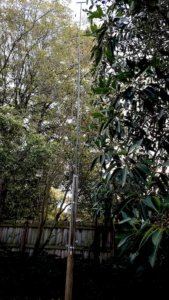 Callum M0MCX (the DXCommander) has a number of interesting videos and website providing information on how to build multi-band verticals for portable operations. Callum’s designs involve a 10m squid pole supporting multiple elements (joined like a fan dipole) coupled with a well-engineered mounting plate which provides for the feed point and attachment of a bunch of ground radials.

For his broad selection of entertaining and informative videos check out: https://www.youtube.com/channel/UCEWRZEIjVQB8aUkyUQ-g-zA

With additional ideas from VK3YE – Peter Parker’s notes on antennas for confined spaces http://home.alphalink.com.au/~parkerp/projant.htm  I figured a stealthy Vertical-L antenna configuration for 160 & 40 and other bands was ‘doable’ at minimal cost.

Taking the principle of deploying multiple vertical wires in differing lengths along with a bunch of ground radials I reconfigured an existing 160 L that had been threaded through a tree  at the rear of my property onto the newly constructed relatively short mast.

The 40m element is about 8m vertical – then horizontal about 2m (for 40).  It is a bit shorter than a quarter wave but I haven’t taken an exact measurement after tuning – this will vary considerably depending on the angle and location of the 90deg bend.

In Monash a mast of up to 8m can be put up without a permit – so it is just within that limit. The mast is camouflaged and blends with the stealthy location in the back of the garden – XYL acceptability factor is relatively high. It also provides a much easier means of raising and lowering wire antenna elements compared to negotiating branches in a tree mounted location.  In one of the pictures, if you zoom in to the top, you will see an insulator a work colleague manufactured on his 3d printer. Another very useful piece of kit. [Images sizes are limited so apologies if you can’t get enough detail, Ed]

The FT8 reception report for transmitting at about 40-50 watts on 40M are shown in the attached photos – quite reasonable given the antennas location amongst trees. 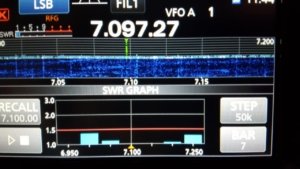 I can readily switch between the 160/40/20m vertical-L, my G5RV and fan dipole.. with different results depending on the received station and conditions. Whilst only recently deployed I have also had a couple of good voice contacts – local 160m and 40m – AM to Sydney on about 25 watts. An additional 20m element has now been added resulting in the need for some minor tuning adjustments to the 160m and 40m elements. This has not yet been tested operationally. 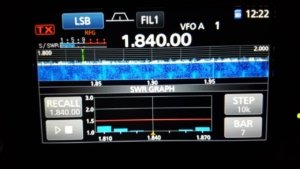 It will be interesting to see how the setup performs in comparison with the other antennas I have. FT8 is a good way of doing this though you need to do a lot of tests as the conditions can change very quickly at times. Testing {see some reports here: VK3ZSG Inv L from 10-16 – PSKreporter.de} now after a couple of FT8 sessions is proving it to be better than the dipole and G5RV for DX particularly the USA probably due to a lower radiation angle. 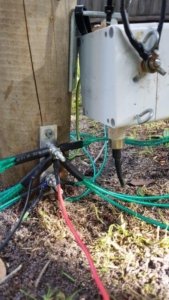 proven satisfactory I will run some conduit for the coax feed, bury the radials in the ground and tidy up the connections. Note that the bright green radials currently comprise 3.5 m (x 9) and 2.5m (x3) plus an additional leg to a ground stake at the back garage from my original 160M configuration.

Next things to do are experiment swapping the 40m element for a loaded 80-40 wire. It currently has low SWR on 160 and 40 – down to 1.1 at around 7.1Mhz and 1.3 at 7.0 and 7.2Mhz. (see pics ) and also on some of the bands above 20M but I haven’t done much testing. I had to slide a 2m long metal tube into the conduit to help stiffen the mast which is also guyed opposite the wire direction – this had no measurable impact on the SWR.

Is the antenna ideal – no but it is functional and a quite a bit cheaper than the DX Commander.  It does demonstrate though that for minimal cost, a bit of research and planning it is possible to get onto the lower bands with reasonable performance on a suburban block without upsetting the XYL and neighbours – for when that matters!

Good stuff Simon, thanks for the article. Regards Ed.