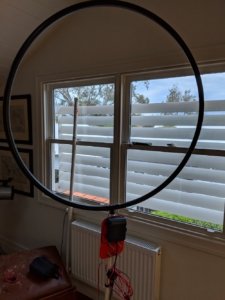 After moving into our current digs in Bayside which is only 432 sq metres it quickly became evident that I did not have enough room for a HF full size antenna. I kept dismissing HF altogether but then I’d get an idea for a different wire antenna but was always defeated by my biggest nemesis, noise. Averaging about S9 across the entire HF spectrum.

Martin, VK3TMP kindly lent me his Alex loop which would tune down to the 40metre band. To my amazement, even in side the foil clad walls I was able to receive most VK states and even Europe and stateside on FT8. In the yard I was again able to work VK, ZL and Asia on FT8 running as little as 10watts. These loop thing’s while not a glorious stretch of wire across the sky may work.

After a bit of research I decide that a receive only loop was going to be a good place to start experimenting and found a pre-amp kit on the Minikits web site along with extensive instructions on how to build a loop.

I purchased one of these from Minikits – link below as it seemed to be a cheap and easy way to drop the foot into loop reception. I thought this active RX only loop antenna for HF would be worth a try for both the QTH and for travel and make a  great companion for my SDR Play RSPDuo. I also had to idea to locate a KiwiSDR at my brothers country property away from the noise of the burbs with a loop antenna. The advantage of the KiwiSDR is that it has a web server built into the beagle bone so just need to supply power to it and connect it to the WiFi.

The unit is purchased as a board and the remainder has to be constructed, consisting of a flexible wire 1.0m diameter loop, a cover for the loop, a box/case and a method of mounting it onto something. Minikits dispatched the purchase promptly and was well packaged and arrived 4 days later in the mail.

The pre-amp can be purchased pre-assembled or as a kit and has an option of a weather proof enclosure which I opted for. The pre-amp has the option of either a F connector or BNC which is specified at the time of ordering.

The loop is made from a 3.14metre length of RG-58 from the junk box with the inner and outer conductors soldered together. The instructions call for a minimum wire diameter of 3mm, close enough.

To hold the coax in a loop I purchased 25mm irrigation pipe and a matching T piece which was threaded which was then attached to a 25mm section of poly pipe. The pre-amp was attached to a piece of cutting board which is held to the poly pipe support with U-Bolts.

The pre-amp can be powered with a 12vDC bias-T or by supplying power to the pre-amp itself. I’m powering it currently with a 12v SLA directly to the board.

For use when traveling, the pre-amp in its slim weather proof case and a 3.14metre length of wire will be used along with a 12v DC wall wort plug pack.

To date I’ve been very happy with the results. Whilst I wont be hearing any rare DX station running 10watts its been more than adequate to listen to all the local nets, international broadcasters and utility stations and that’s with the loop inside the house. I’ve yet to locate it in the yard and see what the performance is like, that’s coming soon. I have noticed a little bit of overload on the 80m band from local MW broadcasters but this is easily handled by the RSPDuo MW notch filter. So, recommend it, great “bang for bucks” and it has satisfied that itch to at least have a RX only HF capability.

The kit’s description from Mini Kits’ site is:

The Mini-Kits EME234 HF Magnetic Loop Antenna module has been designed to be easy to install, and covers a usable wide frequency range from 0.5 to 60MHz. It is particularly useful for those that have antenna restrictions or limited space to install a full size HF receive antenna, or have very high man made noise levels. The magnetic loop is particularly effective at reducing power line and common mode type noise and being a figure 8 pattern with vertically polarized signals, can be rotated to further notch interference. The amplifier is based on the design by Chavdar Levkov LZ1AQ, and incorporates static and lightning protection, and has a broadband 50ohm output impedance suitable for driving most receivers. The amplifier is designed to be used with a 1 metre single turn loop, and a balanced low input impedance common base amplifier is used to match the input. Low cost RF Transistors are used as the active devices, which produce high output second and third order figures reducing the possibility of inter modulation on received signals. The design incorporates power supply decoupling so that power can be fed to the Active circuit via the coaxial cable.

Kits that allow for PoC (power of coax) are also available if you want to put it out of easy reach.

Thanks for the story there Darrin. Look forward to the update. Regards Ed.

insert single photos here – go back to previous page to add another photo. Photos look better with title and that puts a frame around them.