So where did it start, the ILLW started in the Northern Hemisphere 1998 the AYR Radio Group was looking to create an event for their members during summer that was part field day, and something that would be novel and interesting. Also to give the hobby exposure to the public. The Scottish Northern Lights Award was created, for the 3rd weekend in August.

Today some 40 countries are involved, with around 500 lighthouses being registered and activated that weekend. It’s not a contest but an opportunity to work a field day operation from a lighthouse, or in some cases from the comfort of a maritime museum. Working from a maritime museum, also provides an opportunity to share and expose our hobby to the general public. It’s a good fun weekend, and you may see parts of our coastline, that you may not normally travel to.

My introduction to this great event was with Carl VK3EMF, and with some guidance from the Australian organiser Kevin VK2CE . We operated from the old Southbank Maritime Museum. Who happened to have the Gelibrand Light on display. It was a first for Southbank, and the results from this city central location, where surprisingly good. With a strong taste for the event following years worked from Mc Crae light, Cape Schanck, Currie Light and Cape Wickham King Island. A few years I also worked from Portland, and of recent years Port Albert Maritime Museum. Last year did plan for Deal Island, but was foiled by the weather. So, I operated from the museum at Port Albert again. It proved to be a great location for HF contacts, plus a very good coffee shop across the road.

So, what’s the plan this year, well Deal, “and deal me in again”. Having spent many years flying over this attractive group of islands off Wilsons Promontory, about 70km. You will find the Kent Group of islands, consisting of North East Island, Erith Island, Dover Island and then the larger Deal Island. 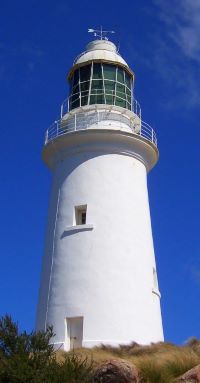 Deal Island is under the control of Parks Tasmania, and is maintained by volunteers on a 3-month rotation. The light is no longer active and was decommissioned 1992. The light is actually Australia’s highest elevated light, some 305 metres above sea level, the stone white structure being only 22 metres high. Constructed in 1848 by the New South Wales, Tasmanian and Victorian Governments, the lighthouse was constructed from local granite, on the highest part of the island. The location proved its demise, as most days the lighthouse sat inside any passing cloud.

About 3 km down from the lighthouse, in the saddle of the island, keepers’ cottages were established. In recent times a small museum was established, along with visitor accommodation. Power is provided by solar cells, and supported by a generator, so no power issues.

Getting to the island in good weather by boat. Can be a challenge, but will endeavour to depart from Port Albert, Wednesday, Thursday before the weekend, establish by Friday. Return subject to weather on the Monday.

The accommodation is based on self-provisioning, but is well appointed. Plenty of space for antennas and certainly the first activation of Deal Island for this event. The last attempted activation for a DX Expedition was back in 2011, but due to weather was abandoned.

Parks Tasmania have been very supportive of the pending activation this year. I think it will also be quite a rare activation, sort after by ILLW (AU0129) participants, along with IOTA. (OC-195).

So, at the moment have a small team of keen operators, as we get closer more logistics planning, and a close eye on the weather.

Get involved and enjoy….. Glenn VK3ILH