In April, Doug Rosser VK2DCR, Treasurer of WICEN NSW, sent out an invitation to a few clubs around the eastern ‘burbs in the hope of finding one who would help support an Australian charity ‘fun run’ event. WICEN was committed elsewhere already and was unable to resource the day. They did however have a kit that could be supplied for the event. John VK3PZ, EMDRC president put out the call to club members and a small team was soon assembled.

On Saturday before the event, and after much coordination from John, the small group arrived at Westerfolds Park – located off Fitzsimons Lane Templestowe. The park is classified as a metropolitan park and comprises a ‘riparian habitat’ within the Melbourne urban environment of around 120 hectares https://parkweb.vic.gov.au/explore/parks/yarra-valley-parklands/things-to-do/westerfolds-park. Not sure if riparian relates to the legal or ecological meaning but roughly it means near a stream – if that’s what the Yarra is hi hi.

John had earlier received, checked and readied all the gear supplied by WICEN NSW and being delivered by the Dementia Australia team. The kit comprised 5 cases and associated gear that included repeater, antenna options and hand-held radios all channelised to operate around 455 / 465 Mhz.

Jack VK3WWW, John VK3PZ, Roger VK3BKR, Luke VK3UKW and myself turned up to check out the area. Jack had an ideal site located that uses a different entrance/exit than most would use. This hopefully meant a quick exit after the event as the Fitzsimons Lane exit is single lane and right turn exits particularly busy.

Although the site was lower than the event headquarters and right under the hight point of the park, coverage via the repeater turned out to be quite good. The repeater from WICEN was set up with a mast around 6-7m and a tidy little 1/4 wave antenna. Quite nicely constructed too with N connectors all round and strain relief –  and no doubt well tested.

With local knowledge that also identified power and BBQ (more of that later), Jack cycled diligently around in the drizzle checking in at key points to test reception – all good and a solid start to the weekend so far.

Sunday ‘morning’ (if you can call anything before 5am morning) saw Jack arrive first, closely followed by Martin and John. Luke arrived at a civilised time once the sun had popped up. Jack had mast fixings well sorted and the rehearsal Saturday paid dividends. Weather was forecast to be reasonably fine and we only had a little drizzle early on. Radios were issued up at the main site while the repeater was activated – all tested out well again thankfully. With radios issued and comms working we headed back to the repeater while Jack set up the gear to handle the Sunday morning WIA broadcast and club net later in the morning.

While that was happening, I started cooking a ‘light’ breakfast of bacon and eggs in fresh rolls followed later by buns and big chocky biscuits for mid morning snacks. No need for lunch! It was handy indeed having power for operations as well as the BBQ – usually the GPOs are not active.

At the appropriate time, the WIA broadcast was managed by Jack followed by Luke covering the EMDRC Sunday Net. All seemed to go pretty smoothly despite the location which was surrounded by hills and the repeater switched over without incident via the link from our location. 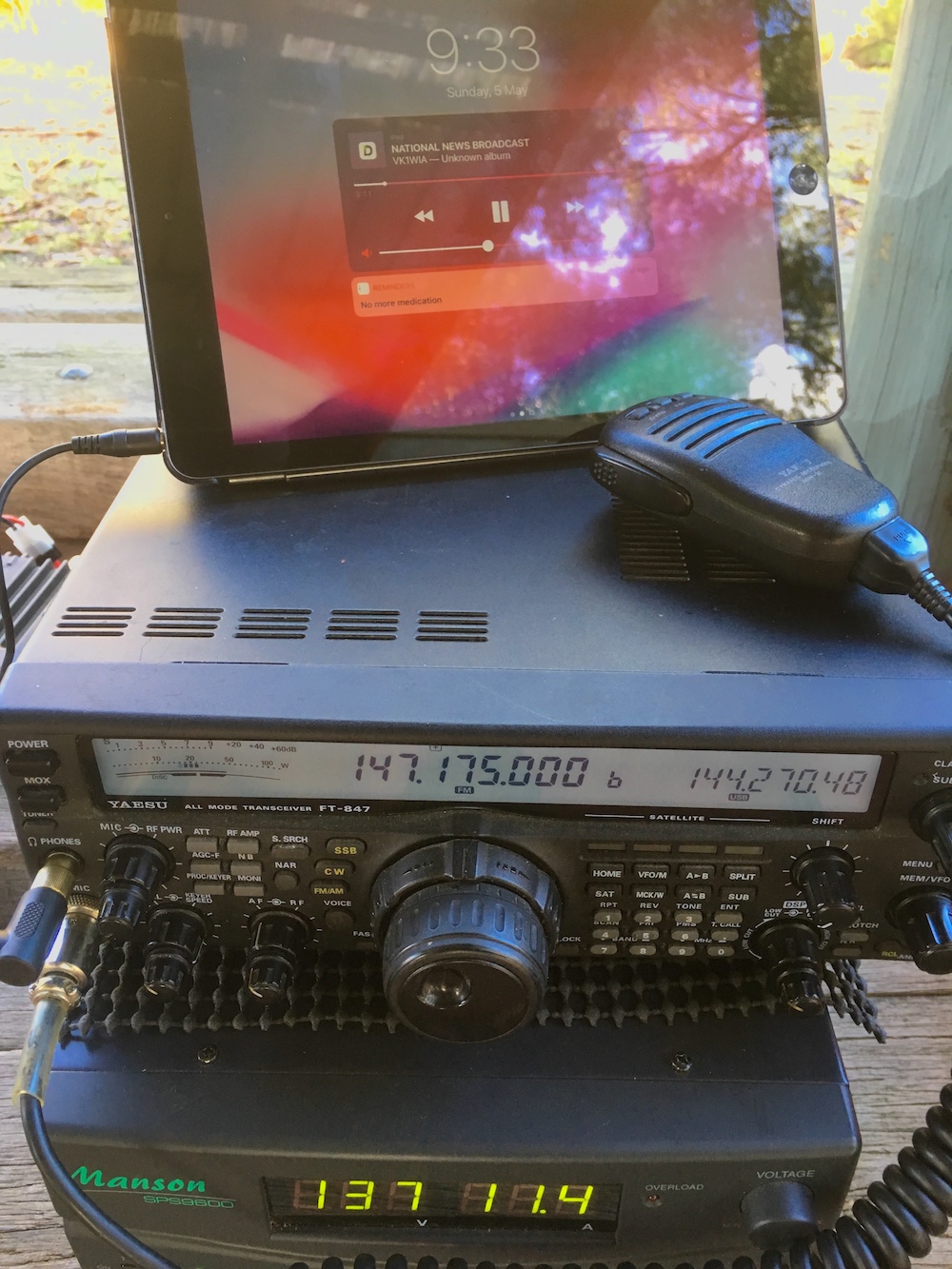 Operations went well and no emergencies. The volunteers handled the comms well, settling in quickly to good practice. We were a little concerned about how we could access and exit the main should we need to – thankfully not an issue. As it turned out though, when we headed in during the presentation we saw the traffic control was one of the best run exercises for a compromised site we have seen. The exit has room only for one vehicle really and right turners can get stuck due to the 80kph zone and hill crest. Traffic was slowed to 40, Marshalls with stop/slow signs managing drivers. Main traffic was delayed no 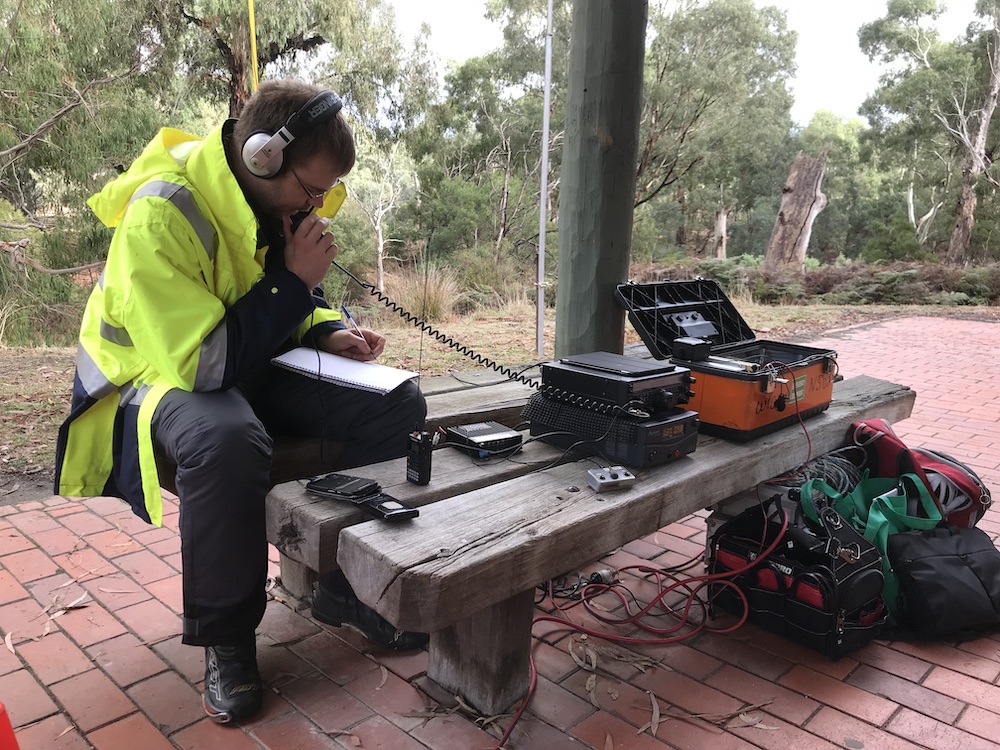 more than 60 seconds each way and the whole park was emptied of hundreds of vehicles in very short time. Radios were returned and once all in they were checked, counted and handed to organisers for shipping back to WICEN NSW – and the four of us headed off for what I suspect to be a noon nap. Overall the exercise was a little different, and with good company, a bit of fun despite the early start.

We’re not sure how many participated on the day but heard they had raised well over $100,000 for the cause. Great job! The operation was obviously familiar to their team as within an hour after presentations, gear was stacked ready for collection and heading off to Albury tonight and Sydney in the morning.