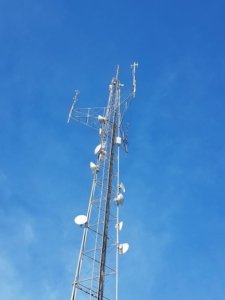 After two and a half years VK3RTV, the Melbourne DATV Repeater is back on the air again. The site for the system is Amateur Radio Victoria’s Mount View in the Melbourne metropolitan area. The site is a high point in the eastern suburbs.

Initial reports are very favourable with most current ATV operators able to access the system. The Repeater is now purely digital with three inputs of 1246, 1255 and 1278 Mhz DVB-S. The output is a multiplexed signal on 445.5 Mhz DVB-T with QPSK modulation. The transmitter is a 500 watt amplifier running an output of 100 watts.

The receive antennas are dual quads sealed in waterproof radomes. The polarisation of these antennas is horizontal.

The output antenna is a vertically polarised omnii-directional array. 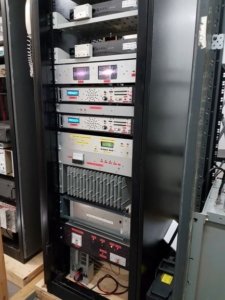 Boards from the US. The DATV Express team needs an order of at least 25 to make a production efficient. At this stage there are 10 on the waiting list. If anyone anywhere in Australia is interested in a DATV Express board, please contact Peter VK3BFG, at
pcossins@bigpond.com and you will be added to the waiting list.

It is planned to have an ATV net on Tuesday evening with net control being Neil VK3BCU. The check in will be on 147.4 Mhz FM. This will be an opportunity for viewers to tune their set top boxes as they will know there will be signals on the air.

On the last Friday and Saturday in August it is planned to have an International DATV Party. This has been received very well by ATV operators in the USA. More information in the next few weeks.