Way back in 1999 Carl VK3EMF (SK) acquired a job lot of old CFA VHF antennas and arranged to distribute them to EMDRC members.  A coffee shop meeting presented by Henry VK3ACW detailed the conversion process and subsequent instructions were included in the December 1999.  They became the rage of the time with club workshops being held assisting those keen to move them down to 146 MHz.  I wonder how many actually remain in service?  Certainly I am aware of at least 4 stored in garages and under houses.  Why is it so?

Jack VK3WWW and I have been practicing Morse in the evenings on 2m and given I live along the Warrigal Rd ridge and Jack well down over Springvale Rd it is not an easy path plus with winter on the way, I needed a 2m antenna with a coax feed into the house.  I remembered I had one of those old CFA antennas under the house and decided it was time to check it out.  The following is a bit of a summary of my findings.

I managed to dig out the old December 1999 Bulletin instructions and after a quick read embarked on a test using my trusty MFJ-269 analyser.  It was good news as it appeared to perform quite well at around 147.00 but down the bottom of the band where we have been playing Morse, not so good.  Obviously these antennas are pretty sharp and I understand from discussion this is probably why they were despatched from the CFA and possibly why quite a few performed badly after conversion.

At least for now the antenna is not suitable for the bottom of 2m and if it is to be used, it needs some work.  After all, it was just stored under the house and had been for probably 20 years.  I decided to pull the antenna apart to check my original conversion and explore the possibility the antenna could go further down, ideally to 146.000 but with reasonable performance at the bottom of 2m.

First I removed the Duct tape and self-tapping screws then attempted to extract the antenna but with the PVC plug firmly installed, brutal force was required. Finally the antenna was extracted.  I then set about confirming all measurements against the Bulletin article.  I found the only non-conforming measurement to be that of the Aluminium disc and there is some detail around that position in Part 3 (The acid test) and further from Craig VK3CMC at the end of the original document.

The disc is visible in CFA 5 above the plastic sealing plug towards the coax termination. The document suggests starting at 488mm and Craig found success around 450mm.  So I decided to set up a test bed using a broom handle pressed into the lawn, probably a bit low but better than setup on a pair of saw horses.  It became clear the antenna wanted to resonate on 147.000 but the instructions indicate it might be broadened by adjusting the aluminium disk location.

SWR but with the antenna firmly centred around 147.000 there was an opportunity to flatten its performance to still be effective at the bottom of the band.  After some fiddling, I found a sweet spot measured between disc and antenna base to be 470mm.

My result is that the antenna still is best at 147.000 but at the bottom end, its performance is far better than our starting point and is usable pretty much across 2m. 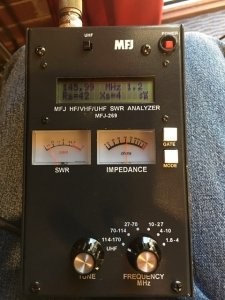 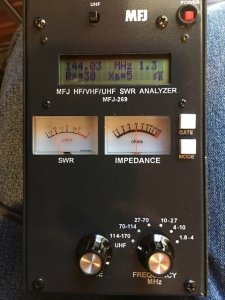 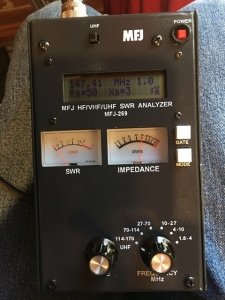 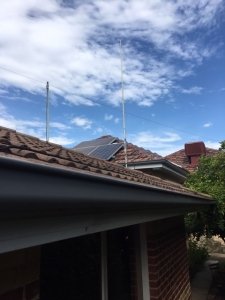