I popped into the Thursday coffee session at the club rooms on Thursday to see a bit of activity underway. In particular, Bob, VK3AIC, was studiously working on a very nice 70cm yogi along with Roger, VK3BKR, acting as helper. (And yes, you do see some of the raw materials on the floor for the next batch of masts the club sells.) 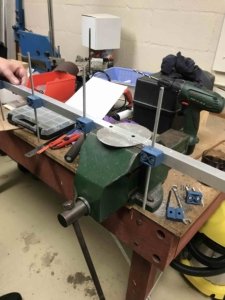 A tidy little half wave 4:1 balun has been assembled – and apologies, I didn’t grab a photo of the copper folded dipole – it was a bit tight in the workshop on the day hi hi.

Bob’s project is derived from the specs produced by VK5DJ’s yagi calculator. He has sourced some bits and pieces to isolate the parasitic elements and the folded dipole. Clearly, Bob has taken great care to build this bit of kit.

The build details are in the below photo. (You should be ablate click on the image to have it enlarge.)