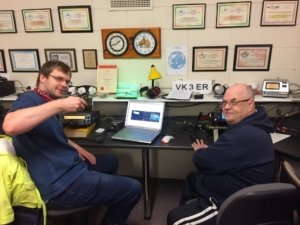 I arrived at the Club Rooms just after 10am this morning, where Dave VK3FDRS,
Jaimie VK3TZE and Steve VK3FRJH were already busy setting up.

When 11am rolled around, there was some lively discussion on 144.150 about VKCL showing the contest not due to start until an hour later. I think this happens on every Winter field day. With the help of VK3BQ’s GPS-locked transceiver we also managed to figure out that the TS-2000 was off-tune 600Hz low on 2m and 200Hz low on 70cm. As the day went on and the radio warmed up this drifted around a bit but we mostly managed to tune onto everyone fine.

At 12pm we made a couple of first contacts on 144.150 and 50.150, and quickly figured out that maintaining the log in VKCL on the one laptop while operating both radios simultaneously wouldn’t work too well and we decided to do the logs for 6m on paper. 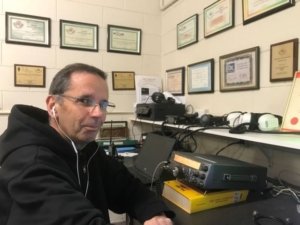 A good gaggle of club members, mostly the usual suspects, showed up. In addition to Jaimie VK3TZE and Steve VK3FRJH this included Darrin VK3VDP, Martin VK3TMP, Dan VK3DAN, and John VK3PZ. Darrin VK3VDP also operated the TS-2000 for a little while.

We racked up 47 contacts on 2m and 70cm, and 26 on 6m. After chasing a couple of contacts we were able to work for the third time after the 2 hour periods had passed, we decided to pack up around 6:30pm.

A good number of club members were heard and worked on air including VK3KQ, VK3PH, and VK3AVV.

The Club shack was a good place to be!  Regards Ed.